Due to lack of archaeological evidences, the origin of paubha paintings is still debatable.  According to a Newari legend, Princess Bhrikuti had taken paubha paintings to Tibet when she got married to King Srong Tsang Gampo. The painting style was then adapted by Tibetan thangka art.

The contradictory version has it that paubha paintings originated in Nepal around 11th century when Tibetan Buddhist monks came to settle in the country as religious painters.
They developed the unique style of paubhas incorporating Hindu iconography while being influenced by Tibetan Buddhist form of thangkas.

Either way, the paubha art form has come a long way evolving over the years with adaptations of new materials and methods of Western paintings while retaining its traditional and religious flavors. 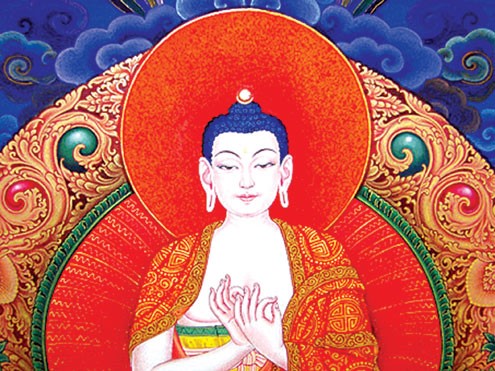 Documenting these changes in the works of contemporary paubha painters, an exhibition of paubha paintings will be on display at Fukuoka Asian Art Musuem (FAAM) in Japan starting January 2, 2011 till March 22, the fifth series of "Contemporary Asian Artist."

Lok Chitrakar, one of the participating artists, says that even though the themes of paubha paintings are traditional, the art is contemporary because "we are not creating replicas."  About the changing trend in paubha, he says that it is inevitable. But he also asserts that to bring something new into the traditional art form it is important that one must first have good understanding of the art form. "Iconography for instance has been very important in paubha paintings so one must at least learn and respect that while working on a new paubha," he says.

Madan Chitrakar, who has been researching on paubha paintings for two decades, says that the last hundred years have been very crucial in regards to the changes in the content, style and medium of the painting. Though paubhas still hold religious deities and icons as central theme, the paubha painters have moved out of their restrictions and are more liberal in their artistic styles with exposure to western art form."While traditionally paubha paintings were made solely to evoke religious devotions or as a tool of worship, for contemporary artists paubha painting is also about artistic expression and art appreciation," says Chitrakar. With very little paubha painting exhibitions and studies happening in Nepal, Chitrakar hopes the exhibition in Japan will not only grant international exposure to the unique Nepali art form but also give a vivid picture of how the art is changing and evolving with time.

Posted in: News and Article