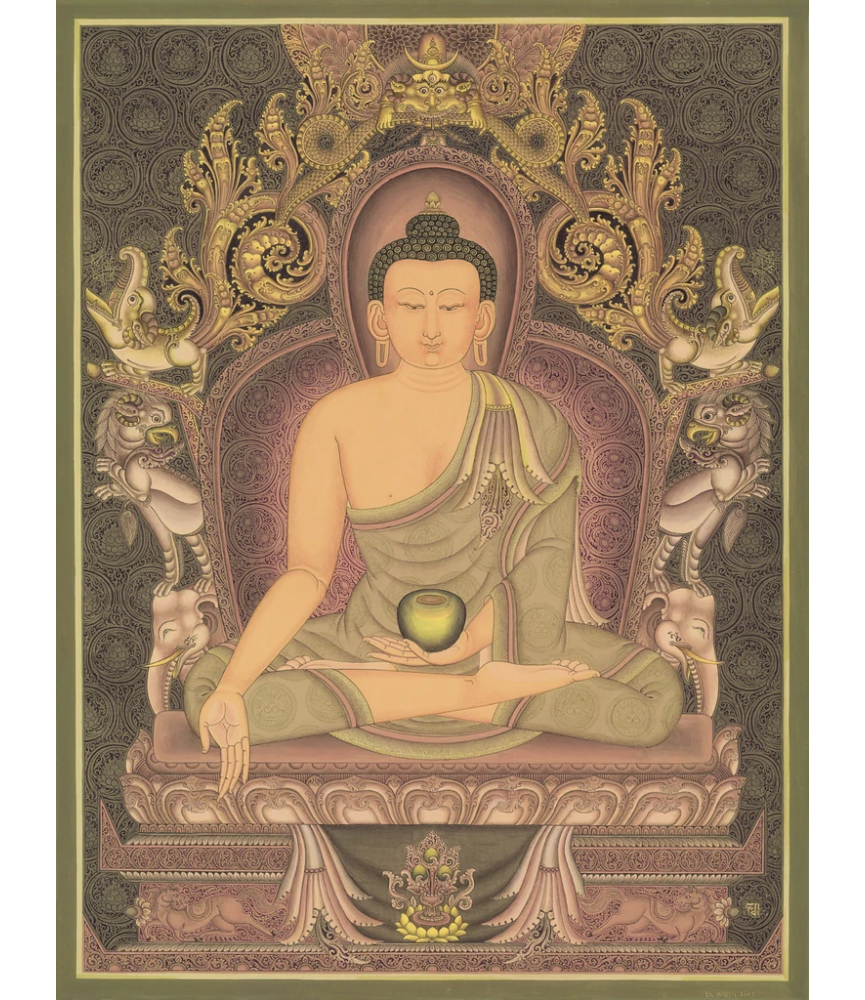 Ratnasambhava is one of the Five Dhyani Buddhas or Five Meditation Buddhas in the Mahayana as well as Vajrayana Buddhism. Considered as the third of the Five Dhyani Buddha, he has been revered as the Buddha of divine wisdom of equality and plays a big role in transforming the inner pride into vision of equality. The name Ratnasambhava is literally translated as “born from Jewels” or “origin of jewels”. This Dhyani Buddha’s presence in Vajrayana Buddhism is to destroy greed and pride.

Ratnasambhava maintains the highest level of Bodhichitta while also offering the gift of compassionate generosity to the sentient beings. Residing in his pure land in the south, Shrimat, Ratnashambhava is often depicted in Tibetan Thangkas with his female consort Mamaki and attended by the male Bodhisattvas Akashagarbhas and Samantahadra as well as female Bodhisattvas Mala and Dhupa. Most of his representations are found to be having a yellow tint, some may even consider him as having a golden yellow color, like a midday sun. In many of his depictions his right hand is empty, out and downward facing, which suggests an equal offering of all so much that his hand cannot hold anything. Similarly, his resting left hand usually holds and objects, which also symbolizes him preserving the gem of Bodhichitta. Some Buddha statues and arts also depict him holding a wish-fulfilling jewel. This jewel is also known to have boundless treasures. Also, he is also seen with his left hand holding a begging bowel representing the opportunity for merit. Both of these symbols; the jewel and bowl, helps lay out the idea that Ratnasambhava gives out generously.

In many of the Buddhist arts that depict him, he is seated in full lotus posture in a white moon disc. The lotus throne is supported on the backs of four golden yellow horses. The lotus throne is a metaphor for the trials all the sentient beings must push through to cultivate wisdom. Ratnasambhava is seen to be wearing richly embroidered yellow robes while his postures are mostly seen to be as the Varada Mudra. Mostly seen as smiling compassionately, Ratnasambhava has a blue-black colored hair and an aura of green light is seen around his head. Similarly, a rich aura of blue light can be seen around his body.

It is also believed that the meditation practitioners meditating by visualizing Ratnashambhava can transform his greed and pride into wisdom of sameness. This can help the practitioner to establish the interrelationships between them. By this knowledge that Ratnashambhava bestows, a practioner is able to realize that by seeking one experience, we are left open to another often more harmful experience.

Be the first to write your review !

Other artworks from Lok Chitrakar 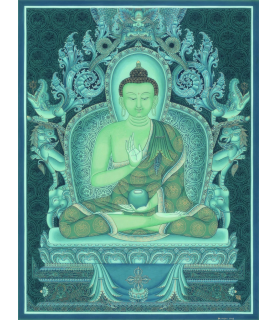 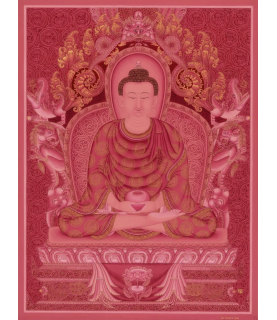 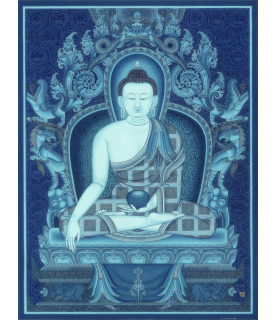 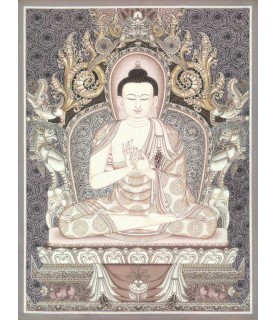