A Nepali lad looks straight into the eyes of a Chinese emperor. Startled by the demeanor of the lad, the emperor asks, "Hey guy, people do not even dare standing in front of me with their heads up, and you are not afraid of even staring at me." With no trace of scare on his face, the lad replies, "Does any one fear to look up to their dads' faces? Kings are like fathers in our country."

Awe-struck by his astuteness, the emperor bestows upon the lad with the task of repairing a twisted bronze statue in a bid to judge his architectural skills. The lad repairs the statue so perfectly that the emperor offers him with more jobs. This is all what students have been reading about Araniko, one of the 15 national luminaries declared by the government, in their text books while at schools for over the years. 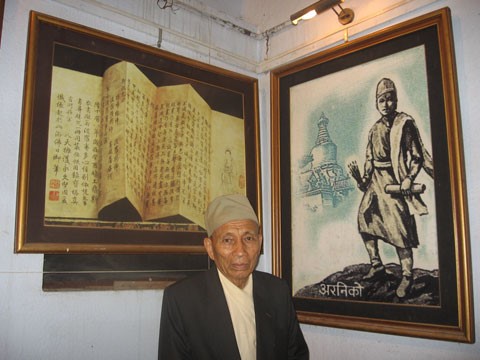 But, once they step out of a narrow sphere of schools and join a large public domain, they never get to know about their hero who fascinates them in their childhoods by bowling over Kublai Khan, the founder of the Yuan dynasty in Mongolia, with his skills. Whether they rummage through the shelves of a number of libraries or search in Google, they know only a bit about Araniko.

In an attempt to help those who like to study more about Araniko, Satya Mohan Joshi, an octogenarian scholar of Nepali language and culture, has set up a gallery of images of Araniko's works. Besides, the gallery contains a range of items including books, newspaper articles and dissertations about Araniko. The gallery is useful in understanding ancient social structure of Beijing as well.

Joshi claims that the gallery is the first of its kind throughout Nepal and China. "I have collected most of these items from China," he says. After the coup of 1960 by the then king Mahendra, the government stripped him of his post of director of the archaeology department. Then, he went to China to teach Nepali language to a group of Chinese people poised to launch a Nepali radio program.

"While staying in China for six years, I collected whatever I came across," he says. He continued with his search even after coming back to Nepal. "Years after I set out searching about Araniko, it turned out to be so huge collection that I no longer found enough space in my house to properly pile it up," he says. "Then, I decided to make it public by setting up an exclusive gallery of Araniko."

Located half a kilometer off the ring road of Kirtipur, Araniko White Dagoba Gallery is in fact a museum as it not only consists of paintings and sculptures of him but every thing that sheds light on his life and works. It particularly focuses on the white dagoba, the magnum opus of Araniko's architectural works. Erected in the middle of Miao Ying Temple in Beijing, the 50.9 meter tall dome-shaped stupa has been declared a world heritage site by UNESCO.

What could be an added feather to the cap of the gallery is Joshi himself. Having studied about Araniko for years, the prolific literary figure has been able to explain the philosophical aspects of he White Dagoba. Even at the age of 88, Joshi seems to be pretty enthusiastic and relentless to help others understand Araniko's significance. He steps out of his Patan home and goes to Kirtipur every day by a bus cramped with passengers in the scorching sun.

The gallery, however, has failed to attract visitors owing to lack of publicity. "Only a few persons have visited our gallery so far", says Joshi, "it is mainly because we have not focused on publicity." Established in the building of Nepal Bhasa Academy as a non profit institution, the gallery has no regular fund to hire even an office bearer for its maintenance. As a result, most of the items have lost their captions that cause confusion among visitors. The floor is full of dust. And, the walls have already begun peeling off.

Posted in: News and Article